Meadowsweet, Queen of the meadow, gracefully takes a place of prominence in our Irish hedgerows from July to September. I love the way that she stretches eagerly towards the sky, full of enthusiasm for life, with her creamy white flowerheads mimicking the passing, fluffy clouds. This herb brings an aspect of pure, unfiltered joy to the hedgerows.

Meadowsweet has a rich traditional history. It was used to flavour mead, wine and beer and was strewn across the floor of parlours to soften feet and scent the air with its sweet fragrance.

Research into Meadowsweet at the end of the 19th Century led to the discovery of salicylic acid which led to the creation of Aspirin, a synthetically altered version of the original plant constituent.

What about its medicinal uses? Let’s start on our homeland and see what our Irish grandparents and great grandparents had to say about it. According to folklore records on www.duchas.ie, this herb was frequently used to settle a stomach, for dropsy, rheumatism, diarrhea, sore throats and kidney troubles.

From traditional to modern times, Meadowsweet stands out as an exceptional herb of choice for conditions of the digestive system associated with acidity, inflammation and poor muscular tone. Meadowsweet helps quench inflammation, tone the tissue and heal mucous membranes. I always use this herb, together with Marshmallow root as a gut healer. Marshmallow coats the lining in a soothing, protective layer of mucilage and Meadowsweet strengthens the integrity of the tissue. The binding and drying effect of tannins present in Meadowsweet also makes it a great remedy for mopping up the excess fluid of diarrhea and for healing the irritated tissue. This herb also has been identified as having anti-microbial activity towards a range of bacteria that can cause food poisoning such as E. Coli, Shigella flexneri and Bacillus. When a herb tackles an issue from so many angles (drying the bowels, healing the tissue, anti-bacterial), it is considered a specific for this condition.

The salicylates in Meadowsweet would have a degree of pain-relieving activity on the joints but bear in mind that this action is much weaker than the pharmaceutical form of aspirin and will not work in the same speedy fashion. If you expect herbs to work in the same way as pharmaceuticals, you will probably end up disappointed and worse than that, you will fail to access the healing benefit of the plants. Herbs are not near as pushy as pharmaceuticals and you need to be patient and give them time to gently tease your body back into a state of health. The salicylates in Meadowsweet are one of many plant constituents that have a beneficial effect for the joints. Meadowsweet was often referred to as a herb that could bind to and excrete excessive levels of uric acid from the body which in turn helped relieve pain and stiffness in the joints.

The most common reference for Meadowsweet uses recorded in duchas.ie was in relation to kidney problems. Being a diuretic (flush the urinary tract), with anti-inflammatory and mild analgesic action (salicylates), coupled with it’s anti-bacterial activity against pathogens known to cause urinary infections (staphylococcus haemolyticus and E. Coli) and it’s reputation for clearing oxalic and uric acid (kidney stones) it makes sense that people found relief and healing from all sorts of urinary discomfort. I have to admit that I have been so in awe with how wonderfully well this herb works on the digestive tract, that I have over-looked it as a kidney and urinary herb. But thanks to our Irish records and the folklore commission, I am now going to consider calling on the Queen of the Meadow to assist me in such cases.

Medicine in the Old man’s beard 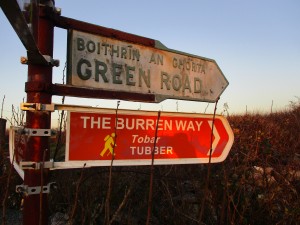 Sometimes I struggle to pin down exactly what it is that draws me to the Burren. It is a beautifully unique landscape, untouched, unspoilt and magnificent. And yet there is more. No matter how much I try to define it, there is always more. There are things that the mind just cannot grasp and I believe that the Burren is one of them. All I know is how I feel when I walk the rugged roads. I feel immersed in something great. I feel that I am in a place where man has no control and it would be foolish to do anything but surrender.  And that surrender opens a doorway and I fall through to the other side. The world as I know it ceases to exist. The crazy mixed-up world of man gives way to a powerful stillness and I move across the limestone pavements knowing that I am being observed by the rocks and the earth and the wind and the shoreline. And something inside of me gets charged. 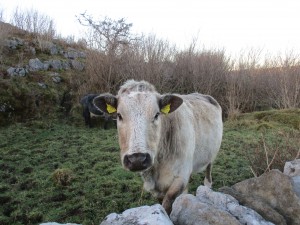 The animals are different in the Burren. They haven’t been suppressed by the ways of man and they are strong in their presence just like the land. The wildflowers know that they are respected and I am sure they make the strongest of medicine. Summers in the Burren are like champagne for breakfast but every season has its own unique face and I see things in winter that escape me in Summertime. The Old man’s beard is one such anomaly.  Alone in the Burren on a Saturday evening with the strong powerful cows at my back and the wisest of trees by my side, I began to investigate these wonderful lichens, wondering how something that was once invisible could suddenly look so striking and prominent.  Lichens are not your normal ‘run of the mill’ type plant. In fact, they are not plants at all but a combination of algae and fungi that have joined forces collaborated and worked out a way of becoming something greater.  This kind of relationship is known in Nature as a symbiotic relationship and it is an essential survival technique for many species and ecosystems. In the case of lichen, the fungi provide the shelter and the algae provide the nutrition, together becoming something new and creative, capable of surviving on earth for the last 400 million years. 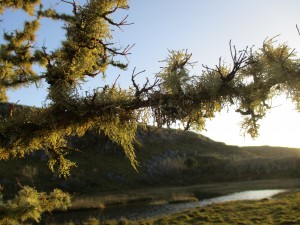 A fascinating fact about Lichens is that they readily absorb sulphur dioxide, a form of air pollution, from the atmosphere.  They do however have a threshold and once the air pollution goes beyond their capacity, they cave in and cease to exist. For this reason, lichen growth in an area can be used as an indicator of pollution and air quality in that location. If an area is completely devoid of any type of lichen, the atmosphere is considered to be of the poorest quality. The hard crusty types of Lichen that cling tightly to surfaces can tolerate a fair degree of air pollution but the leafy lichens and delicate usnea species need good quality air in order to survive and thrive, which brings us back to the Burren where the most sensitive of lichens can confidently stretch their arms and cover the rocks and trees with a coat of fairy fur.

Usnea, commonly known as Old man’s beard is one such happy dweller of the Burren.  In times gone by, when man worked closely with natures resources, these beardy hangings of fuzz were used to staunch wounds. Not only were they able to absorb the seeping fluids but they offered disinfectant properties as well. Usnea species contain acids that are anti-bacterial, viral, fungal and parasitic so as you can imagine, this treasured resource was used not only for wounds but for internal infections as well. Usnea has a rich tradition of use for all sorts of respiratory ailments such as bronchitis and pneumonia as well as for vaginal, skin and urinary infections. In present times, with the ever-increasing threat of antibiotic-resistant bacteria, Science has turned its gaze in the direction of medicinal plants in the hope of finding a much-needed solution. Research has been done on species of usnea and this lichen has proved to be more effective than penicillin for treating several bacterial infections such as klebsiella pneumonia and staphylococcus aureus. These bacteria are prominent players in many infections including urinary infections, wound infections and pneumonia.  Usnea also rates high in its activity against Candida Albicans, the yeast implicated in most vaginal infections. It always makes me smile when I see modern research confirming what was known for thousands of years or more. How did people know back then, in times before the concept of bacteria and viruses even existed? Where did the knowledge come from? Was it observation, trial and error? Or was it from the Bean Feasa, the old Irish healer who spoke to the fairies and gained the knowledge? 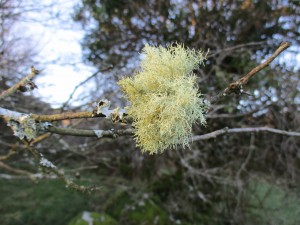 When looking to identify usnea from other species of similar-looking lichen, a tip is to break one of the strands when wet and look for a white stretchy core. This inner elastic strand is specific to usnea and whereas the outer part of the lichen contains the majority of the infection-fighting properties, this inner core contains immune-stimulating polysaccharides which basically work as a tonic for the immune system.  A medicine that fights disease-causing pathogens whilst also acting as a tonic to strengthen the body is in my eyes the wisest of medicine and I know of no place but in nature to find such wonderful cures.  As I pulled apart the usnea strand, it struck me how much it resembled the airways of the lung with the maze of elastic tubular pathways. There is a well-known concept in traditional herbal medicine known as the doctrine of signatures which suggests that nature will reveal its medicine through its appearance and I wondered if others had also made this observation, maybe many many moons ago whilst walking the rugged roads of the Burren.

https://scienceflora.org/journals/index.php/jes/article/view/1898 (usnea in comparison to penicillin)